Cowboys Player Greg Hardy Unemployed, but Not Because of Domestic Violence Charges 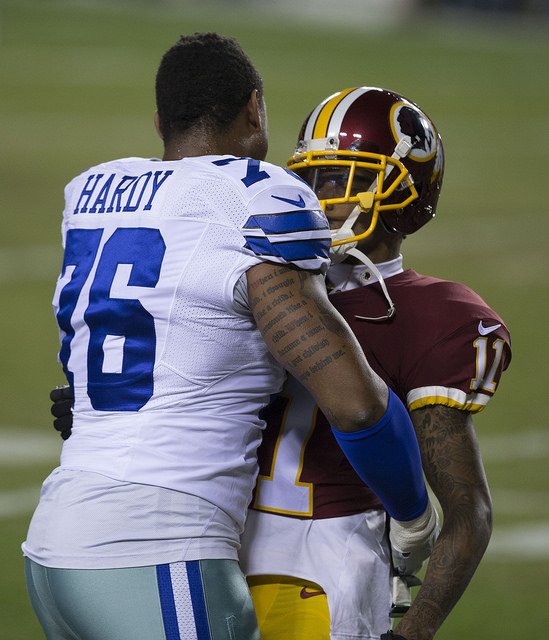 Greg Hardy plays one of the National Football League’s most coveted positions in defensive end — the second-highest paid franchise position after quarterback.  Prior to 2014, Hardy had a promising career ahead of him. But that was cut short after he missed 15 games in 2014 and the first four of 2015, due to a pending domestic violence charge.  The charges included throwing his then-girlfriend around his apartment, choking her and threatening to kill her.  Here’s some of what she reported:

“He looked me in my eyes and he told me he was going to kill me. I was so scared I wanted to die. When he loosened his grip slightly, I said, ‘Just do it. Kill me.’

“Hardy picked me up and threw me into the tile tub area in his bathroom. I have bruises from head to toe, including my head, neck, back, shoulders arms, legs, elbow and feet.

“Hardy pulled me from the tub by my hair, screaming at me that he was going to kill me, break my arms and other threats that I completely believe.

“He drug me across the bathroom and out into the bedroom. Hardy choked me with both hands around my throat while I was lying on the floor.

“Hardy picked me up over his head and threw me onto a couch covered in assault rifles and/or shotguns. I landed on those weapons. Hardy bragged that all of those assault rifles were loaded.”

On July 15, Hardy was found guilty of assault and communicating threats. For the crime, he was given only 18 months of probation. On September 7, less than two months later, Hardy played defensive end for the Carolina Panthers in week one of the 2014 NFL season. The following day, the video surfaced of then-Baltimore Ravens running back Ray Rice knocking his then-fiancée and now-wife Janay Palmer unconscious in an elevator. Even though nothing changed in his case, he was allowed to play a week later. Following the media backlash of the NFL’s dismissive response to domestic violence charges against their players, Hardy was suspended for the remainder of the season.

Related: Abusive Athletes: Where do we stand?

After a two-month investigation and a dismissed jury trial, the NFL levied a 10-game suspension, finding “sufficient evidence” that Hardy violated the terms of the NFL’s personal conduct policy. Hardy appealed. An arbiter reduced the suspension from 10 to four games, making him eligible to return to his new team, the Dallas Cowboys, for a week five game against the Patriots.

In his media session leading up to the Patriots game, Hardy deflected questions about his checkered past but said, “I hope I come out guns blazing.” The unquestionably terrible gun metaphor and blatant disregard for the charges that kept him out of football for 19 games shows a contempt that’s hard to wrap your head around. That type of sociopathic behavior should send red flags up so high they experience zero gravity. Jerry Jones, owner of the Dallas Cowboys, dismissed the comments, saying that “guns blazing” is just a way of “expressing yourself.”

As the season went on, Hardy attempted to put his uncontrollable anger on display. In one game, he yelled at his teammates and slapped a clipboard out of a coach’s hands. In his mandatory media session after the game, he responded to each question with an indignant “No comment; next question.”

The NFL season is long over, and Hardy is without a team again. The Cowboys parted ways with him because of his erratic behavior on the field, however, and not because of prior domestic assault charges.

This week, ESPN NFL reporter Adam Schefter sat down with Hardy to hear his side of the story.  Hardy proclaimed that he had never put his hands on a woman and discussed how pictures can be doctored (referring to the photos of his battered girlfriend from after the incident).  He garnered zero goodwill.  Schefter, however, said after the interview that Hardy was someone who “managed to say the wrong thing at the wrong time” and that Hardy was “adamant” he had never done what he was accused of.  Indignation is pretty adamant.

Michelle Beadle of ESPN and media outlets like Deadspin have panned Schefter and ESPN for defending Hardy. They give him a platform to stay in the public eye and try, ineffectively, to gain sympathy.

Athletes have been given second chances, kept themselves out of trouble and resumed successful careers. Others have shown remorse but have been unable to right the ship. What makes the Hardy case so egregious is that he has shown no remorse for his actions — or gratitude for the seemingly endless opportunities afforded him.

Does he deserve the opportunities those in and around the NFL seem to be tripping over themselves to give him?