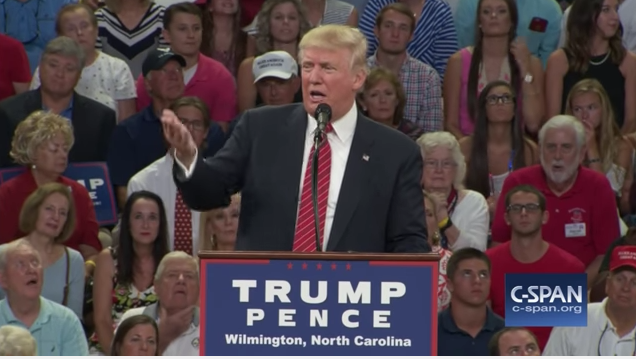 Stop me if you’ve heard this one before: a thin-skinned, narcissistic misogynist makes death threats against a woman he doesn’t like. Even though death threats are illegal, law enforcement officials shrug like there’s nothing anyone can do about it.

That’s just what happened yesterday when Donald Trump spoke about the next president’s Supreme Court picks at a rally in Wilmington, North Virginia. He said:

“Hillary wants to abolish, essentially abolish, the second amendment. If she gets to pick her judges, nothing you can do, folks. Although — the Second Amendment people, maybe there is.”

To get the full effect, watch how he says it. (And watch how the white-bearded guy in the red shirt behind him responds.)

Even though plenty of people — including news legend Dan Rather — cried foul at Trump’s remarks, it was already assumed that he wasn’t going to get into any trouble for making them.

And this was all the Secret Service had to say:

The Secret Service is aware of the comments made earlier this afternoon.

Women have been facing similar threats from online trolls — most of whom are men and teenage boys — for years. Such behaviors are at the root of Gamergate and other efforts to make women feel unwelcome and unsafe on social media, in online gaming and other contexts. And, just like the threats against Clinton, law enforcement has done essentially nothing to actually enforce the laws that make death threats illegal. Last year, Last Week Tonight’s John Oliver skewered this phenomenon:

Even if you can get police to investigate, some officers do not understand the Internet and “that’s a problem, because the police cannot investigate the crime if they genuinely don’t understand the medium in which it happened,” Oliver said. “If someone tried to drown you, you don’t want the police saying ‘Oh I get the murder attempt but what’s this water thing you keep bringing up? Is it like air, but a bit more chokey, is that what it is?’”

“If a woman turns up to a police station saying someone threatened her life on Twitter, the answer ‘What’s Twitter?’ is woefully inadequate,” Oliver said.

The thing is, when police refuse to investigate or enforce laws, they make practices — like death threats — de facto legal.

A recent study found that the guys who troll, harass and threaten females online are literally more likely to be losers. Guys who weren’t scoring well in Halo were more likely to be aggressive toward female players who they saw as encroaching on their turf.

A presidential campaign isn’t that much like a video game, but if Trump is making threats against Clinton, what does that say about his chances of winning?

Unfortunately, while most online trolls don’t have anyone to carry out those threats for them, Trump has millions of people listening closely to him. Rolling Stone described this as a form of stochastic terrorism:

Let’s break that down in the context of what Trump said. Predicting any one particular individual following his call to use violence against Clinton or her judges is statistically impossible. But we can predict that there could be a presently unknown lone wolf who hears his call and takes action in the future.

Stated differently: Trump puts out the dog whistle knowing that some dog will hear it, even though he doesn’t know which dog.

Tell me again — why is Trump getting away with this?